Day 1 of E3 got a bit more exciting when Microsoft finally showed off their Project Scarlett, the Next-Gen. This new Xbox will presumably have everything, from Ray Tracing and Variable Refresh Rate via the Radeon GPU to faster load times via the custom SSD (hopefully PCIe Gen4) and even 8K display. Although this 8K is probably just the output capability of the Console, it should do fine on 1080p and hopefully on 2K and 4K as well.

According to Microsoft, Project Scarlett will support variable refresh rate to up to 120fps, 8K output, and will sport a CPU based on AMD’s latest Zen 2 architecture. AMD will also be lending their latest 7nm RDNA architecture Radeon Graphics technology. Its equipped with GDDR6 that runs on the PCIe Gen4 which will supposedly somehow support Ray Tracing as well, a technology only seen on the Nvidia side. 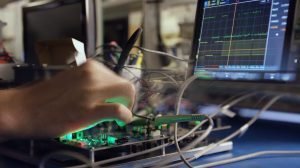 Xbox has also “created a new generation of SSDs” that can be used as virtual RAM for the console. This could boost Scarlett to up to 40x the performance of the current-gen console. Depending on the announcement, Xbox has built a PCIe Gen4 SSD that runs on the current NVMe technology (which our PC readers would be familiar with). This should lead to an excessive performance boost that is already shown by the new PCIe Gen4 SSDs. It should be exciting to see how Xbox is allocating RAM’s job to the SSD and if this can be achieved on PC as well.

It should be interesting how this competes with Sony’s next-gen PS5 that also will also support up to 8K graphics, 3D audio, SSD storage, and backward compatibility with existing PlayStation titles. Sony has also teased 4K 120Hz support with similar Zen 2 CPU and a GPU that also supports Ray Tracing.

Project Scarlett will be unveiled in Holiday season of 2020 along with Halo: Infinite.

Microsoft also announced the all-new Elite 2 Controller. It’s the second iteration of the wireless Elite Controller series for Xbox. This time it’s been added with quite a few things that you can tweak by yourself, giving you the edge as well as comfort to your personal preferences.

Microsoft says they have “Re-engineered it from the ground up” and it’ll sport a USB Type-C for charging.

This short trailer showed off many exciting things.
Elite 2 Controller comes with:

The package will also come with a Dock that not only gives it extra charge wirelessly, but will also have space to keep all your custom thumbsticks and tools to customize the controller.