Vector 2, is a sequel of the well-known and loved Vector, by the same developer Nekki. The game was published on July 6, 2017. Vector 2 is a single player parkour running game with amazing graphics and gameplay. Compatible with both iOS and Android devices, it has reached more than 10 million downloads worldwide.

What is this game about? 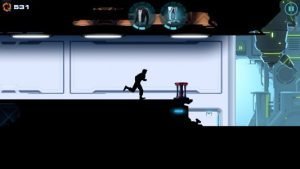 Vector 2 is rather unique, in a way, in this game you quite literally just run. The game allows you to take the role of a silhouette running away from anything that gets in your way. Main concept of this game is endless running and completing each mission. Of course when we say endless running, it does not mean without obstacles. You should at all times avoid bombs and individuals that tries to exterminate you. However, in the event you fail to do so, it’s game over and you will have to restart. The difficulty of the levels as well as missions increases as you progress further in the game.

Unlike Vector, Vector 2 does not have another silhouette chasing you. Here in Vector 2, you just have to avoid bombs and lasers. Sounds like a relatively easy task, but we assure you, it’s not. We’ve tried it and some of us almost threw our phones out the window.

The controls are very simple and straightforward. You control the runner by swiping up to jump, down to slide beneath an obstacle or left and right to give him a speed boost.

Vector 2’s levels are usually split into 2, giving you the option of choosing one other path to exit.  These are marked with signs to indicate which path is more difficult. Allowing you to have the option to choose, would you play it safe and reach the end first? Or would you do the trickier route and unlock more skills, tricks and more loot?

It goes without saying, similar games like these would have upgrades available for your character. Let’s take a look at Armor Upgrades.

The process of upgrading is rather complicated but in time you will get the hang of it. Basically, as you play the game you will gain Data Chips. These Data Chips allows you to upgrade your armor, boots, helmets, belts and gloves. From the image above you can see that upgrading the Ultimate Adrenaline Surge gives you 40 bonus value to tokens collected in 10 seconds after spending a charge. This is pretty self explanatory and of course, different icons means different upgrades. We are not going to go through all of them, but as you play and progress, you will unlock shoes upgrades. We specifically point out shoe upgrades because the moment you unlock and upgrade what is necessary, you will fly through the levels. Upgrade kits are like your gacha boxes, everything you get here is random. There is no guarantee on what you might get. Superiority of items acquired from upgrade kits ranges from common to superior. What you can obtain from here are your upgrades and boosts. Using the image above as an example, we have only acquired common boost and Ultimate boosts. (You can obtain superior level boost here)

Think of this as a load out for your floor, equip and upgrade your equipment before heading out for your level. In the early game you may not necessarily feel that you have to do anything here for you to progress in the game. But, eventually when you do get stuck in a level you will revisit the inventory. You will identify some obstacles in a particular level and certain equipment will help you in that level. With that said, by the time you come to the realization you might have already failed multiple times. Don’t sweat it too much, you are not supposed to breeze through this game in the first place, it’s designed that way. Failing a level multiple times and getting frustrated but eventually clearing it giving you the sense of accomplishment, this is what games like Vector 2 does. Relatively straightforward, this is where you can use Data Chips to unlock tricks for your character. Now, you will probably realize that you have very limited Data Chips at your disposal. But, you need Data Chips in almost any and everywhere. It’s true, so don’t bother hoarding and not upgrading your equipment thinking that it is better to save. It’s not. Upgrading your equipment and tricks will help you progress in game faster than you thought it would.

Is this your type of game? Do you like to face different types of challenges in every level? Are you a risk taker? If any of your answer to the above questions is yes, you may proceed to download the game. We think Vector 2 serves well as a game for you to kill time, when you’re in the train and looking for something to play, this is the one. This game is one of those games that keeps you fully concentrated. You will ignore and tune out your surroundings just for a bit until you clear your level and by then you would have reached your destination. However, we must say that the game is quite addictive. Yes, we are saying that you may actually miss your stop if are too focused. With that said, we hope you enjoyed reading this article and if you would like to see more, click here!